Here Are Ways You Can Help the OWS Movement

Despite the best (or worst) propaganda efforts of the Usual Suspects On the Right — Fox News, Andrew Breitbart, et al — the Occupy or OWS Movement is growing by leaps and bounds, to the point where it’s even scared the authoritarian Communist regime that rules China. Not since the civil rights and antiwar movements of the ’60s have protests had this much impact on American society with one important difference — this time around the majority of the people are on the side of the protestors from the outset. Already the OWS Movement has changed the rhetoric of the MSM; now the Talking Heads are talking about jobs and holding Wall Street accountable instead of cutting Social Security and shared sacrifice (except for the wealthy). Quite an accomplishment for a movement that a month ago was almost totally ignored by the mass media. Read below for ways you can get involved: 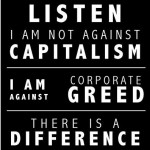 “HOW YOU CAN GET INVOLVED: There are a number of ways that Americans can get involved with the 99 Percent Movement. One way is to donate to the various occupations to help them continue to provide food, shelter, and other necessary equipment. See Occupy Wall Street’s donation page here. Another way is to join the occupations and protest yourself. Occupation groups are using Meetup.com to map out protests and there are currently 2262 groups on the sub-site, which is being dubbed “Occupy Together.” Lastly, you can simply tell your story of how the economy has failed to work for you or your family. The “We Are The 99 Percent” Tumblr already has more than 2,000 submissions, and welcomes new additions.”
— Zaid Jilani, “The 99 Percent Are Winning,’ The Progress Report, Think Progress, Oct. 24, 2011

This entry was posted in 1 Percent, 99 Percent, Corporations, Corruption, Economy, Media, OWS Movement, Progressives, Wall Street and tagged Andrew Breitbart, Fox News, Occupy Together, OccupyTogether.org, OccupyWallSt.org, ThinkProgess.org, We Are The 99 Percent. Bookmark the permalink.
Tip Jar: If you have a few bucks to chip in, it would be greatly appreciated. Thanks!