By Gandhi’s Standards, the OWS Movement Has Already Won 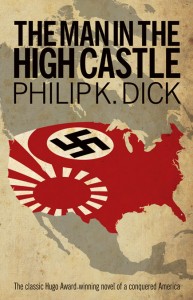 For years, the various miscreants, grifters and ne’er-do-wells who are paid to dispense political opinion in this country wondered where the outrage was as economic conditions worsened for the middle and lower classes and improved immensely for the top 1 Percent. Then, when the OWS Movement exploded on the streets of New York last Sept. 17th, the media babblers sought to turn a blind eye to the ripple in their ‘Man in the High Castle’ Wall Street-DC universe. But, within a week, it was impossible to ignore, so they covered the brave folks camping out in Zuccotti Park as laughable ’60s holdovers, mentally-ill deadbeats, and dirty hippies who defecated on cop cars for fun. For weeks thereafter, every propaganda weapon in the MSM arsenal was brought to bear to discredit the OWS Movement with ridicule, yet it continued to grow, occupying cities all over the country, in every one of the 50 states, including some unlikely towns in the South and West. It was much bigger and more widespread than the astroturfed Teabagger distraction the Big Media doted on last year, and it was obvious the usual tactics of giggling smugly at the crazy woman with the weird hair or a guy with dreads playing a conga drum was not working to lessen the impact of OWS. Unlike the misinformed Teabaggers who mistakenly believed all their problems were caused by the government, OWS had tapped into the truth — our economic problems were the result of the fraud and larceny of arrogant ‘Too Big to Fail’ bankers and Wall Streeters who took our money to bail themselves out of their self-created crisis, and then acted snotty about the whole thing afterward, as if they somehow were entitled  to our money.

Worse, the banksters were throwing people out of their homes, whether they had the title or not, and just generally screwing us blind whenever they had the chance. And these ‘Masters of the Universe,’ and their puppets in Congress, continued to insist, against the clear evidence of the past ten years, that tax cuts for the top 1 Percent would create jobs. When a Fox News poll last month showed a majority of Fox viewers (59 percent) supported the OWS, it was time to bring out the Big Guns — no more trying to laugh OWS out of existence, now it was time to fire off the whole worn-thin package of damning right-wing insults: as well as ‘dirty hippie,’ there was leftist, communist, socialist, radical, Marxist, Stalinist, fascist, Nazi-like, ‘spoiled college kid,’ pervert, rapist, thief, atheist and unAmerican. But the same mud the Corporate Right has been throwing since the late ’40s didn’t stick — OWS contiunued to grow. Then the gloves came off entirely and the billy clubs and pepper spray appeared along with confining journalists away from the action ‘for their own protection’ to hide what the police were doing, abetted by the bizarre belief of the 1 Percent that they can intimidate the movement out of existence through force. The elite has just played its last card and it’s a deuce against the non-violent hand of aces held by the OWS. Already the national dialogue has gone from the 99 Percent further ‘sacrificing’ to maintain the tax cuts of the wealthy to reining in Wall Street corruption and making the rich pay their fair share. Most of all, some form of the question ‘Why should these banks and corporations have so much power over our lives and our government?’ is finally being asked. As the new year unfolds, and Scott Walker is recalled, I think any politician who doesn’t start working the OWS side of the street can count him-or-herself gone in the next election and a fresh crop in Congress and the statehouses will begin drafting and enforcing laws to hold corporations, Wall Street and the banks accountable for the misery they’ve caused our country. It all goes back to Gandhi: “First they ignore you, then they laugh at you, then they fight you, then you win.” 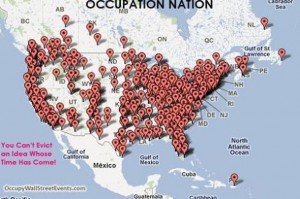 In the 1930s and 40s Factory workers, miners, and laborers demonstrated for better and safer working conditions.

They were first ignored, then mocked, then violent conflict erupted. Even the US army was called to “maintain order”. A number were killed. The result was the union movement.

In the 1950s and 60s, Blacks demonstrated for equal rights. They were first ignored, then mocked, then shot, beaten, attacked with dogs and fire hoses, some were killed. But the result was civil rights/anti discrimination laws.

In the 1960s and 70s There were demonstrations against the Vietnam War. First ignored, then mocked, then the clubs,  fire-hoses and bullets came out. But the result was the war ended!

Today we have financial inequality and corporate abuse. Some chose to demonstrate.

They were at first ignored, then mocked, and now the violence has begun. I believe that the result will be that the people will prevail!

Thanks to dotcom Jim