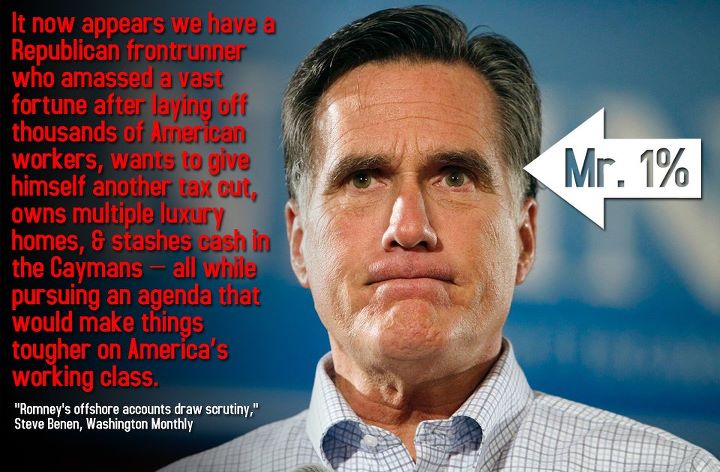 There continues to be a question barely touched on in the so-called ‘national debate’ about the wealth of Mitt Romney and the other top 1 percent: what did they do that is worth the money they made?  Romney ‘created’ (inadvertently) a few thousand mainly low-wage jobs — is that worth his $250 million US in assets today and the $45 million he receives annually for not working at all?  (BTW, since he also outsourced or eliminated thousands of American jobs, his record as a ‘job creator’ is a wash at best.)  I don’t care if someone gets rich for actually doing something — whether it’s writing a best-selling book, playing a sport, or inventing a useful product — but Romney and most of the top 1 percent didn’t accumulate wealth through their labor — they fundamentally just gamed the system and shuffled paper around, a demented system where you can get $45 million a year for NOT working.  (What’s wrong with that picture?)

Inevitably, any consideration of wealth in America ends up talking about Microsoft co-founder Bill Gates, still the richest person in the world according to Forbes.com, with wealth of $59 billion.  Unlike many, I have no hard stick against Gates or his Microsoft partner Paul Allen ($13.2 billion); I mean, how can you hate someone who became rich outsmarting IBM?   But the question remains: is what Gates and Allen did worth a total of $72.2 billion?   The various Windows platforms, as ‘buggy’ and frustrating as they sometimes were and are, have revolutionized personal communication and access to information, and are responsible for providing the bedrock for the free exchange of ideas on the Internet that led to uprisings against various authoritarian regimes across the globe, the blossoming of the ‘citizen journalist’ movement, and may ultimately even save democracy in this country.  While it may not be a cure for cancer, it’s a pretty incredible achievement for a couple of computer geeks, and I could say the same about competitors like the late Steve Jobs ($7 billion at the time of his death) and his Apple co-founder Steve Wozniak (net worth in 2011 a mere $100 million).  Leaving aside for now the internecine, ‘inside baseball’ battles in Geekdom over the relative importance and brilliance of the four computer icons mentioned, at least they worked and made a contribution to society; Romney, from what has been written about him, ran a leveraged-buyout company, Bain Capital, that essentially had no reason for existing; Bain would swoop down and buy up some firm, gut its assets and, if they couldn’t prop it up again, let it go bankrupt, but Bain always profited from upfront ‘fees’ even if the acquired company went bankrupt, even if Bain shareholders took a loss.  Romney made his millions from business practices that were illegal in this country at one time and should be again.  And, with his privileged background and prominent-politician father, it’s a lock that he would have ended up with a well-paid gig somewhere no matter what he did.  As Edgar Bronfman Sr, billionaire one-time head of Seagram’s Distilleries, once said, “To turn $100 into $110 is work. To turn 100 million into $110 million is inevitable,” and that’s what Mitt Romney did; he rolled his inherited advantages into riches, with winning the birth lottery his only real ‘work.’

Here are some interesting facts about Gates and his money, published in 2006:

2. If he drops a thousand dollars, he won’t even bother to pick it up because during the 4 seconds he picks it, he would’ve already earned it back.

3. The US national debt is about 5.62 trillion dollars, if Bill Gates were to pay the debt by himself; he will finish it in less than 10 years.

4. He can donate US$15 to everyone on earth but still be left with US$5 Million for his pocket money.

5. Michael Jordan is the highest paid athlete in US [in 2006]. If he doesn’t drink and eat, and keeps up his annual income i.e. US$30 Million, he’ll have to wait for 277 years to become as rich as Bill Gates is now.

6. If Bill Gates was a country, he would be the 37th richest country on earth.

7. If you change all of Bill Gate’s money to US$1 notes, you can make a road from the earth to moon, 14 times back and forth. But you have to make that road non-stop for 1,400 years, and use a total of 713 BOEING 747 planes to transport all the money.

Excerpt from the PBS documentary “Triumph of the Nerds”: