This is the way to do it, outwit them — imagine a crowd of OWS protestors dressed in suits and ties, with the women wearing dresses or business attire. And imagine the images of the police busting people dressed like that. It would make right-wing heads explode, and make a subtle point as well. We’ll see if this catches on. 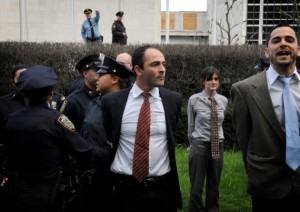 Clever OWS Activists Get Police to Arrest the Bankers in Suits

Sometimes justice requires a little imagination. On Saturday, when much of the Occupy Wall Street movement in New York was loudly denouncing police violence against minorities and protesters, a small group of environmentalists dreamed up a way to get the police to focus on the crimes of the 1 percent, to the point of arresting five corporate suits on United Nations property.

Granted, those five were actually members of the OWS affinity group Disrupt Dirty Power, which used Saturday’s action (billed as a “mock’upation”) to launch a month of actions targeting the “corrupt partnership between Wall Street, politicians and the business of pollution.” Police officers seemed thrown for a loop as they tore down tents bearing corporate logos and cuffed people who claimed to be from Bank of America and ExxonMobil. Compared to the rowdy anti-NYPD march earlier that afternoon, this time, the cops had more of a chance to think about what side they’re really on.

This entry was posted in 1 Percent, 99 Percent, Conservatives, Corporations, Corruption, Humor, Idiots, Media, OWS Movement and tagged Business Dress, New York, NYPD, Protestors, United Nations. Bookmark the permalink.
Tip Jar: If you have a few bucks to chip in, it would be greatly appreciated. Thanks!