I’d like the high school records of some of these right-wing smear merchants, currently honing their skills trying to posthumously destroy the character of Trayvon Martin, subjected to the same scrutiny as they’ve used on Trayvon’s teenage years, cut short by a bullet from George Zimmerman’s 9mm. Sure, Trayvon had a tattoo, maybe smoked some pot, swore, occasionally got into a minor jam at school, all pretty standard for a 17-year-old boy these days. That said, this kid the right-wing is trying so desperately to spin into some kind of stereotypical ‘gangsta thug’ was never arrested for anything, and he had good grades despite a few school suspensions. Meanwhile, we have George Zimmerman, apparently a Dirty Harry wannabe with an arrest record of violent confrontations whom even some supporters describe as ‘overzealous’ in his self-appointed neighborhood watch ‘captaincy’; an ignoble man who has people out lying for him, telling tall tales of a vicious, bloody, life-threatening attack by Trayvon Martin that included a broken nose and battered skull that we now know is utter bullcrap, debunked by the police video filmed less than an hour after he murdered Trayvon Martin. But you won’t hear the righties questioning Zimmerman’s questionable adult record — apparently he’s okay because he killed one of ‘them.’ 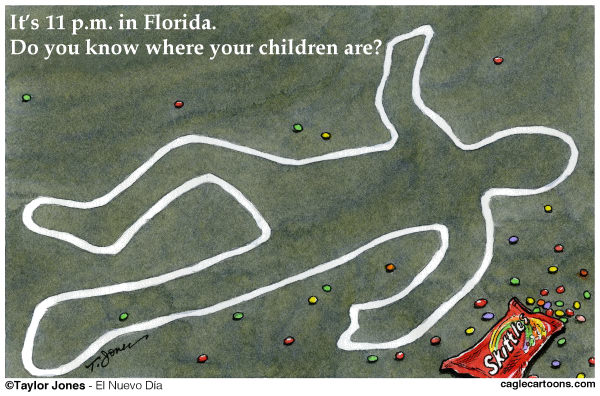 Surprise! Trayvon Martin Was a Normal Teenage Boy (And the Danger of Seeking a “Perfect Victim”)

He used bad words! He maybe smoked pot! He was suspended from school for “truancy” and for being late a lot! He quoted rap lyrics on his Twitter account! Given these revelations, it was clearly ok for an armed stranger to stalk him on the street and shoot him in the chest, right?

Here’s the thing about most people: We are not perfect. Very few of us would make perfect victims. But certain classes of people are given the benefit of the doubt more than others; they’re considered more trustworthy, more deserving of living a victimization-free life. Certain classes of people will have their pasts, or perceived imperfect behavior, brought up to explain why they really aren’t victims, even when that past has no bearing on the particular crime at hand.

It sounds like Trayvon Martin was a pretty average teenager. He liked some offensive rap lyrics. He might have smoked pot. He engaged in a few minor acts of delinquency. Sounds pretty much like me and everyone I knew in high school.

The video below is a worthy effort by these college students but, sadly, most white Republicans would look at them and see them as suspicious, just for having darker skin, hoodie or not.