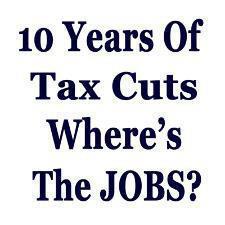 You’d think the Republicans would be able to scrape up some poor schmoe to be the poster boy for their talking-point buncombe that the top 1 Percent create jobs, but it was too much for them. As the saying goes, if tax cuts for the wealthy created jobs, we’d be awash in jobs right now. Think Progress has more details on yet another Republicon scam:

“…NPR requested help from numerous Republican congressional offices, including House and Senate leadership. They were unable to produce a single millionaire job creator for us to interview.”
— Tanya Somanader, “Republicans And Business Groups Unable To Find One ‘Job Creator’ Who Opposes A Tax On Millionaires,” Think Progress, Dec. 9, 2011.

This entry was posted in 1 Percent, 99 Percent, Corporations, Corruption, Idiots, OWS Movement, Republicans, Teabaggers, Wall Street, WTF? and tagged Jobs, NPR, Republican Crap, Republicons, talking points, Tax Cuts, ThinkProgess.org. Bookmark the permalink.
Tip Jar: If you have a few bucks to chip in, it would be greatly appreciated. Thanks!